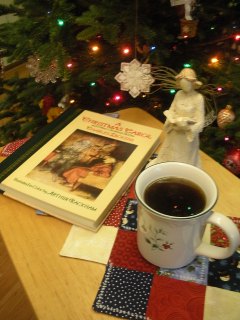 We all know who He is…Santa Claus, and he’s coming to town so you better behave. The legend of a jolly fat bearded man in red delivering toys to children in a sleigh pulled by eight flying reindeer can be traced back to a 3rd century monk named St Nicholas from Patara, near Myra in modern-day Turkey. Nicholas was admired for his piety and kindness as he traveled the countryside giving away all his inherited wealth to help the poor and the sick. He became known as the protector of children and sailors. December 6th, the anniversary of his death, is still celebrated. Not even the Protestant Reformation could tarnish his image and he maintained a positive reputation, especially in Holland.

St Nicholas found his way into American tradition toward the end of the 18th century, when a New York newspaper in December 1773, and again in 1774, reported a group of Dutch immigrants had gathered to celebrate the anniversary of the death of “Sinter Klaas.” As his popularity grew, Sinter Klaas’ image varied from a “rascal” wearing a blue tri-cornered hat, red waistcoat, and yellow stockings to a man with a broad-brimmed hat and a “huge pair of Flemish trunk hose.”

The Christmas celebration of gift-giving to children began to grow in popularity in the early 18th century. By 1820 stores were advertising Christmas shopping and by the 1840s newspapers were devoting separate sections for holiday advertisements featuring images of the newly-popular Santa Claus. Thousands of children flocked to a Philadelphia store in 1841 to see a life-size Santa model and it wasn’t long after that stores began advertising the opportunity to see a “live” Santa.  The Salvation Army picked up on the idea in 1890 and started using unemployed men dressed as Santa Claus to ring bells and collect donations to pay for the free meals they provided to the needy.

Clement Clark Moore, an Episcopal minister, wrote “An Account of a Visit from St. Nicholas” in 1822, a long poem that later became known as “’Twas The Night Before Christmas”, for his three daughters. The modern image of Santa Claus was born. In 1881, Thomas Nast, a political cartoonist, was inspired by Moore’s poem to draw the first modern day likeness of Santa for Harper’s Weekly. Nast is credited with giving Santa his bright red suit trimmed with white fur, North Pole workshop, elves, and a wife named, of course, Mrs. Claus.

Other countries have their own versions of a St. Nicholas inspired gift-giver. There is Christkind or Kris Kringle for the Swiss and German children, and a jolly elf named Jultomten in Scandinavia. English parents tell their children stories of Father Christmas. Pere Noel visits French children. In Russia, an elderly woman named Babouschka is believed to have given the three wise men wrong directions to Bethlehem to purposely keep them from finding the baby Jesus. To this day, on January 5th a remorseful Babouschka leaves presents at the bedsides of little children in hopes that one will turn out to be the Christ child. La Befana, a kindly witch, is believed to ride her broomstick down the chimneys of Italian homes to deliver gifts to lucky children.

As for that endearing ninth reindeer, Rudolph, he was the creation of Robert L. May, a copywriter for the Montgomery Ward department store in 1939, over a hundred years after the original eight flying reindeer.

To learn more about the history of Santa Claus, the Christmas tree, or Christmas celebrations in general, visit www.history.com, the official website of The History Channel and a wealth of information.

A tale of a girl who went forth to be published
History... the interesting bits!
pocketsfullofloveblog

Comfort reads with a dash of fun