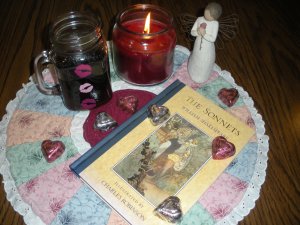 St. Valentine and Cupid, the two figures, one real and one myth, most closely associated with Valentine ’s Day. Who was St. Valentine? The answer to that question is unclear.

The Catholic Church recognizes three different saints named Valentine or Valentinus, all martyred. One was a priest who served in the third century Roman army. Emperor Claudius II believed single men made better soldiers, men not distracted by a wife and family, so he made it illegal for young men to marry. Legend has it this soldier priest defied the decree by secretly marrying young soldiers who had fallen in love. When the emperor learned of this, he ordered Valentine put to death. Other legends suggest Valentine, while imprisoned and awaiting his execution, may have been killed helping Christians escape from the tortures of Roman prisons. According to one legend he actually composed and sent the first “Valentine” after falling in love with a young girl, perhaps his jailor’s daughter, who visited him regularly. He is supposed to have signed his greeting “From your Valentine”. The one thing the legends all have in common is the portrayal of Valentine as a sympathetic, romantic hero. By the Middle Ages, Valentine would become one of the most popular saints in England and France.

Perhaps the most familiar symbol of Valentine’s Day is Cupid, that fat winged little angel with the arrows that are supposed to make their target fall in love. This vision of Cupid, son of Venus, Goddess of Love, comes from Roman mythology. However, Greek mythology envisioned Cupid much differently.

Eros, the son of Aphrodite, Greek Goddess of Love, was a handsome young man who made the mistake of falling in love with a mortal woman, Psyche, said to be even more beautiful than his jealous mother. Aphrodite sent a plague to Earth and made it known the only way to end the suffering was to sacrifice Psyche. The King, Psyche’s father, bound her and left her to be devoured by a fearsome monster. Eros rescued Psyche and married her. His one requirement, though, was that his bride never see his face. This did not bother Psyche as she was happy with her husband who was a wonderful lover by night and left her to live in unimaginable luxury by day. Unfortunately, Psyche had two sisters who were just as jealous of their sister’s beauty as was Aphrodite. They convinced Psyche her husband must in truth be a horrible monster. So one night Psyche lit a candle to see for herself. Instead of something ugly and fearsome, she saw the face of a god. As Psyche gazed at the sleeping Eros, her candle dripped hot wax and he awoke. Angry at her betrayal, Eros flew away. Devastated, Psyche begged her mother-in-law for another chance. Aphrodite set Psyche on a quest to complete four tasks in order to win back Eros’ love. Psyche managed to accomplish the first three tasks with the help of ants, a reed, and an eagle, but the fourth task became her downfall. Aphrodite sent Psyche to the underworld to steal a box of Persephone’s beauty cream. Again with help, Psyche learned how to find the entryway to the underworld, how to get around the guards Charon and Cerberus, and how to behave in the presence of the Queen of the Underworld. But, as Aphrodite predicted would happen, Psyche could not resist the temptation to open the box. Psyche reasoned that if the most perfect goddess Aphrodite could be made even more beautiful by this cream, imagine what it would do for her, an imperfect mortal. Upon opening the box, Psyche fell into a deathlike sleep. With the help of Zeus, Eros brought his sleeping wife to Olympus, where she was given nectar and ambrosia and thus made immortal. On Olympus, in the presence of the other gods, Aphrodite was forced to accept Psyche as her daughter-in-law. Psyche would soon give birth to a daughter named Pleasure.

In Latin the word Cupid means “desire”, that emotion we celebrate this Sunday by giving our loved ones cards, flowers, candy…perhaps that much-anticipated ring. Come back next week and read about the origins of those traditional Valentine’s Day gifts.