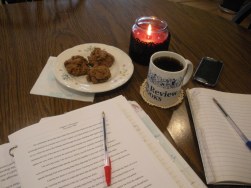 I recently had the opportunity to judge a writing competition. I’ve critiqued before, but always friends, people I know, and I was sitting with them at the time. I was able to look them in the eyes, answer questions if I wasn’t clear, see if I was too rough and needed to maybe tone it down a little. This time I was emailed eleven blind entries. No names, no identifying information. And I didn’t give just comments, but actual number scores. Some would rank higher than others and it would be me who made that decision. I’m not the only judge for these entries. There are several others for each entry and an average is awarded, with the lowest thrown out for good measure. I know that if no one else agrees with me and I’m the lowest score, I’ll be the one set aside.

It was a fun learning experience. I got to have a taste of eleven different works-in-progress. Several were wonderful and I was sorry I didn’t get to read more. Several needed a lot more work.  A majority of them fell somewhere in the middle. But all were worth my time and I was glad for the opportunity.

Constructive criticism is not easy. It doesn’t matter if it’s a first attempt at cooking the family holiday dinner, painting a bedroom, sewing a straight seam, or, yes, writing a book. Criticism can take all the joy out of someone. Not everyone’s book will be a best-seller. Not everyone’s painting will be bought by a wealthy collector. We can’t all be JK Rowling or Rembrandt, but we all deserve to be happy with who and what we are.

When you’re asked for your opinion here’s a thoughtful three-part approach. Start with something good. “I love your strong, confident, but down-on-her-luck heroine. The way she told off her mean boss, even though she needed the job to pay for Christmas presents for the orphans, made me want to stand up and cheer!” Then point out something bad. “I didn’t like her foul mouth, though. She dropped way too many F-bombs for a department store elf, especially in front of all the children waiting to sit on Santa’s lap. I don’t care how mean Santa was to her.” And finally, something you’d change. “How about your heroine waits until the end of the day and then lets the grumpy-old-man Santa have it in the back parking lot?”

By starting with the positive you let them know they’re on the right path. Their effort has worth. If you start out by telling the bride-to-be that she really hit the mark with that lovely shade of pink for her bridesmaids, she won’t be quite as hurt when you nicely point out the big bow on the back is not a flattering look for her over-weight sister, the maid-of-honor. Then, when you give a suggestion for a fix, you give the person something to think about. It shows you care and you don’t think their effort was a total waste of their time and yours. “I bet the tailor could just remove that bow and then you’d be left with simple lines that will be flattering for all your attendants.” By no means should you smirk, or gasp, or let slip an outright guffaw.

It also works for those unbearable family dinners. You know what I’m talking about. The ones where your uncle drinks too much, your mother can’t stop asking when you’re going to settle down and give her grandchildren, and your niece insists on bringing her new boyfriend that everyone hates. The one with multiple piercings (some of which, thank God, you cannot see but have no doubt are there) and a plethora of violent and vulgar tattoos. I’ll let you imagine how you’d handle the three steps for constructive criticism with each. Consider it your homework for this week. It’s never too early to start practicing.