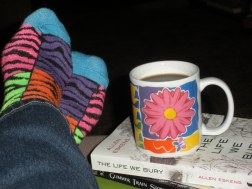 Have you ever read a book or watched a movie you were really enjoying until you got to the end? A story that had an ending so disappointing, or infuriating, that you wished you’d never wasted your time or money? I have. For example, I got all the way to the end of “Thelma and Louise”, expecting that at any moment they’d find the courage to step forward, when all of a sudden they drove off a cliff! Really? I was beyond disappointed.

Then there’s the example of a truly amazing ending, one that left me spell bound. Last night I watched “Sunset Boulevard”. I hadn’t seen it in years and was in the mood for a classic movie. A movie from the days when the characters weren’t jumping from bed to bed and didn’t drop the f-bomb every other word. First, I must add that the best line I’ve ever heard is when Gloria Swanson, aka Norma Desmond, says: “I am big. It’s the pictures that got small.” Even though she was clearly living in her own little fantasy world, you totally believed her.

If you haven’t seen the movie, the year is 1949 and Norma Desmond is an aging silent movie star who believes her return to the big screen is inevitable. William Holden plays Joe Gillis, a down-on-his-luck screenwriter who, while trying to evade the men who have come to repossess his car, happens upon Desmond and her loyal friend and servant (and first director/first husband) Max. Ms Desmond has a screenplay that needs editing. Her plan is to present it to her old friend Cecil B DeMille. Gillis is drawn into her fantasy world as he helps with her screenplay, realizing too late that she has fallen in love with him. During his attempt to escape her web of dreams she shoots him. The house is besieged by police and reporters, notebooks and cameras in-hand.

They find Norma Desmond at her dressing table putting on her make-up. She has completely lost her already weak grasp on reality and believes she is preparing to shoot a scene from her screenplay. When she hears “the cameras” are ready for her she appears at the top of her grand staircase. Max, waiting at the bottom with the news cameras, sets the scene for her and calls action. Norma slowly, gracefully, descends the staircase, through the crowd of police and reporters who watch frozen in place, both enthralled and horrified by her madness. Her eyes play to the camera as only Gloria Swanson can. At the bottom of the stairs she drops character, gives a speech about how happy she is to be back on set at Paramount, and then, looking at Max, speaks that famous closing line: “All right, Mr. DeMille. I’m ready for my close-up.” I sat mesmerized as the credits rolled.

When most people think happy endings they think happily-ever-after. They think Cinderella and Prince Charming. They think Hallmark movies and Harlequin romances. Yes, those are your traditional happy endings. But the kind of happy ending I’m talking about is the ending that leaves the reader/viewer sitting mouth open and totally blown away. The kind of ending where you know that it could be no other way, good or bad, where you don’t feel cheated. The kind of ending where you can do nothing else but hug the book to your chest or sit slack-jawed, as I did last night, and stare at the credits while letting it all soak in, reliving every word, every action, over and over again in your head.

Comfort reads with a dash of fun