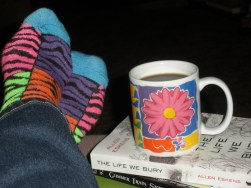 Nostalgia: a longing for pleasures, experiences, or events belonging to the past; intense homesickness.

We’ve all been there. A song comes on the radio and you’re back at the prom, maybe your first kiss…or whatever…in the backseat of your boyfriend’s car. You bite into a cookie and it reminds you of your grandmother’s recipe and there’s that moment where you miss her intensely all over again. This weekend I’ll be attending my class reunion. There will be lots of talk centered on “remember when”. Sometimes we’ll laugh; sometimes we’ll sigh, wondering where the years went. Hopefully most memories will be good ones, but inevitably some will not. We’ve already lost our share of classmates.

It’s why we treasure the photographs and videos. It’s why we’ll search endlessly for a recipe our mother or aunt or grandmother always made when we were children. It’s why we hit the dance floor without hesitation when “our song” begins to play. We love to remember what was in the past; the things we want to carry into our future. Nostalgia plays a major role in our holiday and special event celebrations.

A recent news story took me back to my childhood. One of my favorite candies may soon be gone. NECCO Wafers. I hadn’t thought of them in years, yet the moment I heard they may soon be discontinued I felt a panicked need to find them and buy them by the box. Commentators are debating whether or not they were any good to begin with. Some make faces and declare them tasteless and they’re glad they’ll be gone; but I’m tightly entrenched with those who say they were wonderful! Are wonderful!

The history of the NECCO Wafer is a long one. “In 1847, a young English immigrant, Oliver Chase, invented the first American candy machine, a lozenge cutter. After initial success selling his new candy, he and his brother, Silas Edwin, founded Chase and Co., which became the pioneer member of the New England Confectionery Company (NECCO) family. Over the years, NECCO Wafers became so popular that in 1913 the famed Arctic explorer Donald MacMillan gave them to Eskimo children on his journeys to the North. And in the 1930’s Admiral Byrd included 2 ½ tons of NECCO Wafers in his supply list for a two year stay in the Antarctic. Then, during WWII, the U.S. Government requisitioned a major portion of production for American soldiers serving in WWII, as the wafers didn’t melt and rarely broke during transport. Today, approximately 630 million NECCO Wafers are made each year. Placed edge to edge, they would go around the world twice!” (http://www.necco.com/candy/wafers.aspx)

I will definitely be searching out a supply to stock up on…just in case they really do go away.