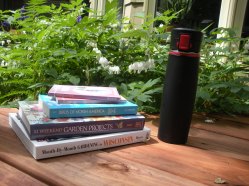 I love reading books about strong women. I’m currently reading “Last Woman Standing” by Thelma Adams. It’s about Josephine Earp, wife of the legendary Wyatt Earp, a Jewish girl from San Francisco who goes to Tombstone chasing the love of one man only to find it in the arms of another. Before that I read “The Last Tudor” by Philippa Gregory about the three Grey sisters: Jane, Katherine, and Mary. Lady Jane Grey was queen for nine days before being imprisoned and executed by her cousin, Queen Mary. Katherine was imprisoned and ignored by their cousin Queen Elizabeth until Katherine’s death. The youngest of them all and a little person, Mary Grey, was the only one strong enough to survive being imprisoned by Queen Elizabeth until her release.

A strong woman is not a bitch. A strong woman does not hurt others by climbing her way to the top over their backs. She does not have to be crude or rude or even ruthless. A strong woman believes in herself and can stand up for her beliefs. She doesn’t have to put down others in order to build herself up. Nor does she have to sleep her way to the top. She recognizes that sometimes doing the right thing means stopping to support another. She also knows when accepting the help of another is what’s right for her at that moment.

So many people have the wrong idea, the old antiquated idea, about romance novels. It’s been years since the main character was a weak woman who needed a man to save her from the bad guy; a woman who, when she says no really means yes; a woman who learns in the end that she really does love the bad boy who took charge and showed her the ways of love.

I write about strong women. In “Mary Bishop”, Mary learns just how strong she is when her husband’s strength fails him and she must rely on herself to hold their world together. And she learns her strength does not fail her when his death leaves her alone to fight those who would harm her, too. In “The Healing Heart”, Alice has to find her own strength when the influenza that almost takes her life does take the lives of her parents. When Alice’s fiancé returns from the war in France, a man damaged both physically and emotionally, she must decide if her strength is enough to bring him back to the man she fell in love with, or if it’s time to accept the love offered by another.

Celebrate the strong women in your life. Be a strong woman.