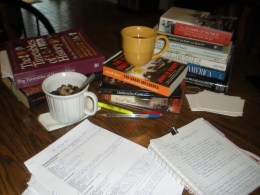 A great way for romance writers to get feedback on their work-in-progress (WIP) is to enter one of the many contests offered by Romance Writers of America and their various chapters. You don’t have to be a member to join, but if you are it will cost you a little less in entry fees.

Unpublished or published, there are many contests from which to choose. This is my fourth year entering WisRWA’s Fab5 contest. The first year I entered “Mary Bishop” in the historical romance category and placed in the top five. The second year I entered it in the women’s fiction with romantic elements category. That time I scored in the middle of a group of very competitive entries. Last year I entered my current WIP, “The Healing Heart”, in the historical fiction category and again placed in the top five. This year I’m trying it in the women’s fiction with romantic elements category. Judging has begun and first round results will be announced mid-April. That’s when the top five in each category will go on to the second round. The final placement for each category will be announced in June.

First round judges are published and unpublished peers. This is where you get detailed comments with your scores. I’ll received scores and comments from three judges, with my overall score/placement based on an average. If I make the second round, then I’ll be judged by one publisher and one literary agent. Their scores will determine the final order of the five entries. They might also request a partial or full manuscript submission, and that could lead to publication. So far I haven’t received a request from the second round judges, but again, I received some very helpful comments.

Entry requirements are different for each contest. For the Fab5 you enter the first 2500 words. Others might request a certain number of chapters, and some will also require a synopsis so judges can see the full storyline. WisRWA does not.

Prizes vary. WisRWA awards a plaque. As I said, the real prize is given to all entrants… comments! There’s nothing that will keep you going on a slow or discouraging day like knowing other writers enjoyed reading your work.

This will be my third year volunteering as a first round judge. I’ve judged both historical romance and women’s fiction with romantic elements, depending on which of the two categories I did not enter that year. I love being a judge. Even the entries that are clearly from beginners are a joy to read. I’m grateful for the chance to give my time to help other writers in the same way others have given their time to help me.

This past weekend I received eight entries for judging in the historical romance category. They’re printed, along with score sheets, and ready to take to the cabin this weekend; the cabin, where my phone reception is spotty and no one is coming to the door. The cabin, where I’ll have plenty of quiet time to give each one a careful first read and take notes that I’ll go over again later, before making my final comment/score decisions. I know how much I’m going to rely on the comments/scores I receive back on my entry and I want to give that same consideration to these eight writers who are, no doubt, anxiously waiting to hear what the judges have to say about theirs.